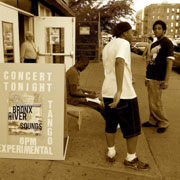 A century since its inception along the Rio de la Plata, tango has lost none of its power, with fresh incursions into big-screen (and small-screen) romance, the club scene, and, with most telling intensity, jazz. Tango’s grace and supple bandoneons got their start just as the movie and record industries were taking shape, and they’ve been working closely together ever since. […]

[…] Legendary bandoneonists Dino Saluzzi and Daniel Binelli came through town; Binelli had been in the Osvaldo Pugliese’s powerhouse orquesta, got the nod from Piazzolla late in the latter’s fabled career, and played Carnegie Hall in 2001 with his compatriot, titanic concert pianist Martha Argerich. […] In June he played the Bronx River Arts Center with composer Laura Andel’s ensemble, which included downtown avant-guitarist Elliott Sharp, who coproduced Andel’s SomnabulisT (Red Toucan).

Binelli’s intro on Andel’s Doble Mano was riveting and brutal, revealing within moments how tango tinges beauty with cruelty. Andel had premiered the evening-length work at the Kitchen with Uruguayan bandoneonist Raul Jaurena (whose Soundbrush release, Te amo tango, features originals with piano and string quintet). Vividly atmospheric, Doble Mano functions as an emotional scenography (a terrain implied by titles such as Salgán’s Buenos Aires at Three in the Morning and Piazzolla’s Tango: Zero Hour). Andel, however, only suggests tango; gamelan and motoric minimalism course just as readily through her work. “Improvisation is when you really hear the player’s background,” she said of her expert ensemble. “I wanted the bandoneon players to embellish the work with their own language, as well as sections where the gamelan was on top with the bass doing the arco phrasing typical of tango.” […]