Laura Andel is a composer and sound artist born and raised in Argentina, currently based in Harlem, New York City. 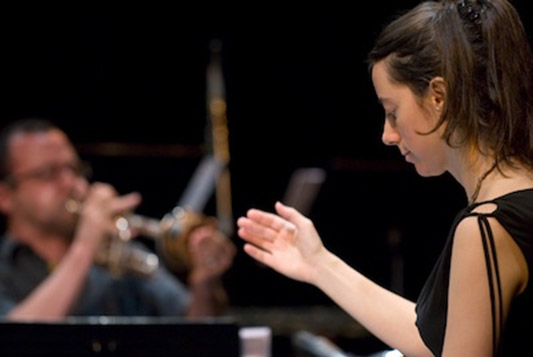 One of Laura Andel’s main interests is exploring diverse combinations of instruments for her music, and collaborating with musicians from different musical and cultural backgrounds. Described as someone who “seeks to expand our sense of time, form and perception through sound” by Evening Music (WNYC, New York Public Radio), Andel combines written music with a variety of approaches to improvisation and conducting to create different symmetries between the written and non-written. She has composed and conducted music for small and large orchestras, Jazz Big Band, Symphony Orchestra, and for instruments such as Javanese Gongs, Argentinean Bandoneon, Brazilian Berimbau, Russian Theremin, Ecuadorian Dulzainas, and Mochican Seashell-shaped Ceramic Trumpet.

Her creative process also investigates the visual manifestations of music and sound by way of creating original music drawings and graphic scores that initiate an intimate dialogue between sound and its representation. She has created works in pencil, ink, watercolor, acrylic, and collage.

Laura Andel’s music is published by such labels as Red Toucan, Rossbin, Innova, CIMP, Cadence Jazz Records, and can also be heard as soundtrack for video, film, and choreographic works. Andel’s music has also been selected for publication to celebrate the 50 Years of The Rockefeller Foundation Bellagio Center, the 40 Years of the Massachusetts Cultural Council Fellowships, the 10 Years of Red Toucan Records, and the 30 Years of the New York Foundation for the Arts Fellowships. The Laura Andel New York Orchestra has recorded four CDs: Somnambulist, In::Tension:., Doble Mano, and Khartes.

Andel has started building her own instruments in clay. Currently, she is exploring the sound of her self-made seashell-shaped clay trumpets, which she also records, manipulates its sounds electronically, and creates electroacoustic works.

Andel is developing collaborations with installation and video artists which feature her electroacoustic music and musical instruments built in clay.