Laura Andel is a composer whose work defies categorization. Her broad musical pallette sometimes blends Latin and Middle Eastern styles; other times it mixes Asian with American moods. There are moments when her music holds the seriousness of classical symphonic music, and then moves suddenly and seamlessly into wild flights of free improvisation. Her work has won jazz composition awards, yet she writes without regard for jazz theory or standard song forms. Add to those contradictions her complete lack of concern about making money with her music, and you have one unusual musician.

During her teenage years in Argentina, Andel acted as an amateur musicologist, traveling around the Americas and other parts of the world, immersing herself in the music of many cultures. After establishing herself as a flutist and saxophonist in several folk, tango, and jazz groups in Buenos Aires, Andel enrolled at Berklee to study jazz composition and film scoring. A few years later, Andel’s “El Pire” won the BMI Foundation-Jerry Harrington Jazz Composers Award. Her music has been performed by jazz artists like Joe Lovano, Jon Faddis, and Phil Woods, and by groups in Germany, Venezuela, and New York. Now based in Cambridge, Massachusetts, the 1997 Berklee graduate is writing new material and preparing her orchestra for a performance next spring in Berlin.

Are you really as unconcerned about making money as you say?

I can’t let money get in the way of my music. I made a decision a few years ago to turn down “commercial” music gigs, to just focus on what I wanted to say. I knew the inner search would be difficult if there was pressure to make money. I don’t let outside influences force me into doing things I don’t want to do. People respect that and call me for what I am, and not what they want me to be. It might take longer this way, but I am at peace with myself.

As a composer, then, how do you measure how well you are succeeding?

When people come up to me after a performance and say, “Your music really moved me,” that’s the big payoff for me.

Describe your process of composing.

I usually start by improvising at the piano, looking for colors or rhythms that I like. Once I settle on something, I’ll record it into a sequencer and let that pattern loop over and over. Then I’ll play over that, adding new melodies or rhythms. The process is hypnotic in a way. Then I’ll come back the next day and keep building it. Slowly, I see how one piece relates to another. It’s like a puzzle; after several days of adding different ideas and colors and rhythms, I find that I have a complete picture.

Is there usually a chord progression running below the surface of all that?

No, it’s really just melodic lines and colors mixing. There may be tonal areas at times, but usually the chords are ambiguous.

How do improvisors approach soloing over such tunes?

They just use their ears. I’d rather leave it up to each player’s creativity. I think their response is better if they’re not thinking about pre-established traditional chords or scales or looking at the sheet music. I know it might be harder that way, but they seem to enjoy it.

When Joe Lovano soloed on “El Pire” at a rehearsal, he used his ears and he sounded great. After rehearsal he asked me to write out the bass line for the concert performance just as a reference, so he could use some melodic and rhythmic ideas the other instruments were playing, and I did.

Usually I give little information at first, and then, depending on each musician’s need, I try to guide them or give shape to the solo. 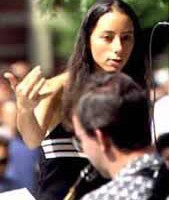 Laura Andel conducts her orchestra at a performance in Boston. Photo by Liz Linder.

You have worked with several groups in the past few years, but mainly with the Laura Andel/Oli Bott Jazz Orchestra. How did that group come about?

I met Oli Bott, a German composer, at Berklee in 1996, and we found that we had similar ideas about music. When he was getting ready to return to Germany, we came up with this crazy idea to put together an international group, with musicians from different countries, that would play several concerts every year, sometimes in Europe, sometimes in the U.S. The makeup of the band would depend on which city we were playing in. We’ve played a few concerts in Berlin and one in Boston, with George Garzone as guest soloist. It’s been a great experience; we’re trying to make it a band with a strong and original voice.

What is the instrumentation of the band?

It’s a traditional big band, but I don’t use it in a traditional way. Usually, the woodwind players double on various instruments, but I use a lot of unisons, not voicings. For example, I often use four or five different melody lines in unison, each on a different instrument, creating a mix of interesting colors. I don’t use sections in a typical way. For example, instead of a trumpet section, you might hear a trumpet, a soprano sax, and a flute together. I want the whole thing to be very mixed so that you never really distinguish how the timbre of that melody is made. I like to look for new colors.

What impact has Berklee had on your development as a musician and composer?

For me, it was great that Berklee attracts so many different sorts of musicians from all over the world. If I wanted to do something with a Middle Eastern sound, I might be able to find a Turkish drummer. Or if I needed Brazilian musicians or Japanese musicians, I could always find them. A person from a different country will interpret music in a different way.

It was also great to write music and know that I would be able to hear it performed live by a group of musicians, and know that I had so many musicians to choose from. Plus with all the recording studios at the college, I got a chance to really hear what my music sounded like.

There were some good classes, especially Herb Pomeroy’s line writing class. There were also a lot of clinics. I remember a Bob Brookmeyer master class that was really good.

Your interest in music from around the world goes back to your childhood. How did that start?

My early training was in classical music, but when I was 16, I fell in love with Latin American music. I started to play that music and read a lot about those cultures. But I really wanted to get closer and understand their cultures from the inside. So I began to travel extensively, every year to a different area in South America. I did it for seven years. I would interview people, record their music, and learn to play their instruments. Sometimes I even played with them. I was really attracted to their music, and I thought that the only way to learn about their music and culture was being with them.

What countries did you visit?

My very first trips were close to Argentina because I used to travel by bus at the beginning. I wanted to know every piece of land and feel the transition from one place to another. I did very long trips; sometimes I would travel by bus for seven days to get to a place, like when I went from Buenos Aires to Quito. In the Americas I visited Uruguay, Brazil, Chile, Bolivia, Peru, Ecuador, Colombia, Paraguay, Mexico, Cuba, Venezuela, Argentina, Canada, and the U.S., of course. In Europe and the Middle East, I went to Israel, Germany, Spain, England, Italy, Luxembourg, Belgium, France, Holland. I also did a very short visit to Morocco.

Wow. Is there any culture that has had the strongest influence on your music?

It’s hard for me to say. All of them! Some of my music is heavily influenced by my background in tango music. I’ve heard it all my life, I’ve performed it, and I love it. One musician that has influenced me a lot was (Argentinian tango great) Astor Piazzolla.

Is it hard being a woman composer, conductor, and bandleader, running bands composed mostly of men? Have you faced any sexism?

Not at all. If you think it’s hard, it’s going to be hard. Whether a composer is a man or woman, we are all people with emotions and experiences that we want to express through music. Music goes beyond sexism. When you stay focused on music itself, all distractions that can distort the art evaporate.

What advice do you have for other young composers?

I think there is a thirst for composers and musicians who offer an original and personal view of music. It is a matter of having a clear idea of what your goal is. Just stay focused on that, and be persistent. If none of the opportunities out there are appealing to you, then make your own opportunities where you can be creative.