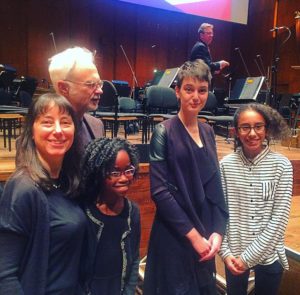 What is the Sound of the World Today?

This question was asked to composers Jordan Millar (10), Mondriana Villegas (13), and Mia Micic (14) before getting to composer their commissioned works for the Young People’s Concert to premiere at the New York Philharmonic on March 11, 2017.

The last of the Ages of Music concert series featured the Modern Age of Music, which featured American composer John Adams as well as these very new young generation of women composers.

As a New York Philharmonic Teaching Artist, I had the opportunity to mentor Jordan, Mondriana and Mia, and to accompany them through their creative process. It was an incredible experience going through all the stages of premiering a new composition, which included an initial brainstorming of ideas, notating the music, rehearsing, and presenting the new works in front of an audience!

Listening to these young composers’ music was something to behold, as well as to hear what they had to say about their music. Even composer John Adams, which was there to witness such a wonderful moment was amazed to be sitting at the New York Philharmonic listening to such young composers’ works.

The picture at the top was taken right after the premiere of the new works at the New York Philharmonic, and just before the John Adams (Composer) feature concert. 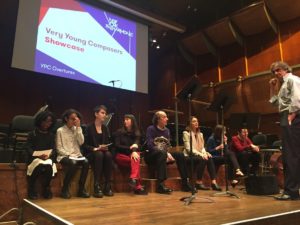